In 1990 Michel Chapoutier took over the family farm, one of the oldest viticulture properties in the Rhône Valley, in Tain-l’Hermitage, which has been in the vine business since 1808. Tempted quickly for the integrated management of the biodynamic agriculture, he decides to reconvert the vineyard, obtaining the Demeter certification in 1999. Biodynamics is an esoteric doctrine that believes in the effect of cosmic energies on plants and animals conceiving the farm as a single organism (for more information read the post “La biodinámica y su creador”).

Chapoutier, after years of study, conceives an absolutely original container. The material to be used is not new; it is cement. In the 19th century, cement containers began to be used in almost all the wineries, both for alcoholic fermentation and for storage. It was the most common material in the building of containers. They were usually coated with some sort of material to prevent direct contact of wine with cement, which was done for three reasons. The first was so as to avoid the degradation of the container, as it is vulnerable to certain components of the wine, especially the acidity of it. The second reason behind ensuring that the wine did not come into contact with the cement was that it could acquire an earthy taste or end up tasting like the cement. The third reason was to facilitate the cleaning of the container, avoiding possible bacterial or fungal contamination. 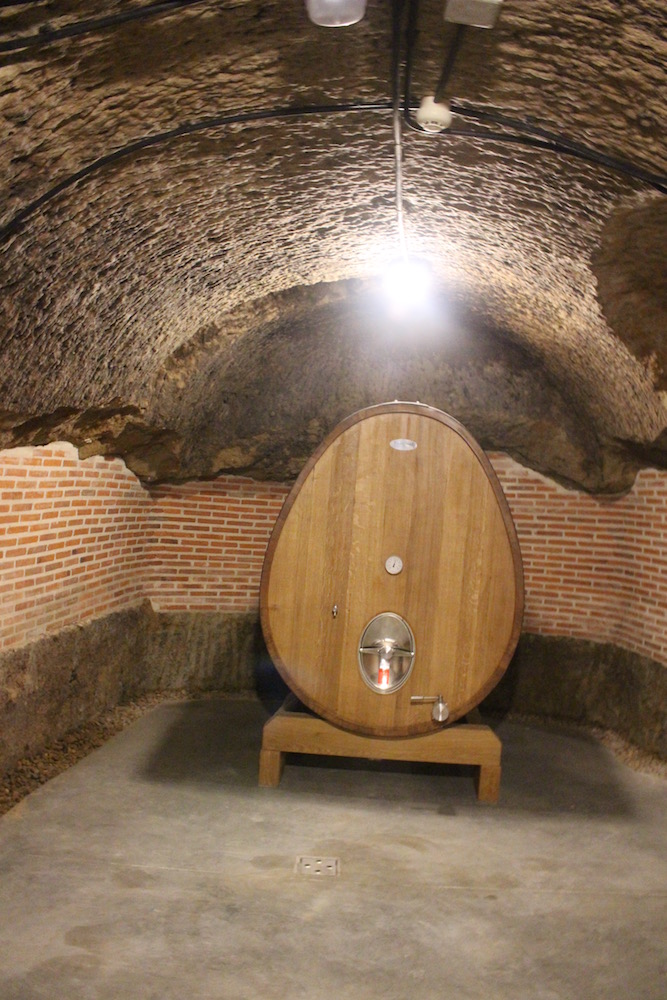 With the discovery of stainless steel it fell into disuse as it was considered inefficient, dirty and old-fashioned. It should be noted that some large firms have never stopped using cement containers, such as Château Petrus.

The radical change is not in the materials used, rather in the form of the container. Inspired by the ancient Roman amphorae, the Georgian Kvevri and simply barrels, he concludes that the ideal form of a container for fermentation and ageing is the egg. Chapoutier strongly believes that the oval form will efficiently harness terrestrial and cosmic energies, resulting in a product in balance with the physical and spiritual environment.

In 2001 he gets in touch with Marc Nomblot, who is the director of the company Nomblot, which has specialized in cement containers for oenological uses since 1922. They work together on the design and materials of construction of the new container. An important premise, no chemical substance can be used during construction. The materials used are: washed sand of the Loire, gravel, non-chlorinated natural water and French cement; Iron cannot be used.

An original idea, self-confidence, courage to develop it and hard work are the ingredients of success, from the first vinificationin Tain, to the conquest of the world. At present it is the fashion in winemaking. The biodynamic processors embrace the new container with renewed faith, the reasonable producers wonder about their qualities, and most buy or have on the agenda to acquire some, and even the most sceptical, listen intently while looking indifferent, while internally being interested. The Cement Egg Age has arrived.

More specifically, the era of the ‘Ovoid Container’. The success of the proposal has not left indifferent tank builders for fermentation and storage who use other materials. There are oval containers of terracotta, wood and plastic, each with its advantages and disadvantages and, of course, with very different prices. The most expensive is the wood, first presented in 2011 by the barrel producer Joseph François. The cheapest, obviously, is plastic. Flextank USA manufactures ovoid shaped plastic tanks that allow the passage of oxygen in small quantities, very similar to those allowed by wooden barrels, in which they have been inspired. 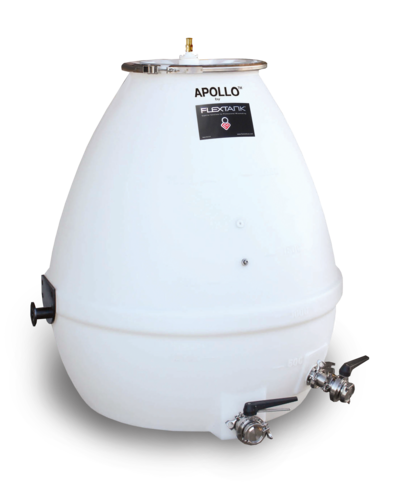 The first thought that came to my mind when I saw the first cement egg in cellar was how exquisite it looked. That grey stone look and the esoteric touch meant that it looked beautiful in any location.

Terroa – and what is it for?

The biodynamic producer is great. The wine is different. Due to the forces of movement of the earth and probably others of the cosmos and such forces, the wine is moving all the time from the top to the bottom and to the sides, increasing the contact with its lees and therefore performing a natural ‘batonage’. The tannins are softer and increase or maintain the floral aromas among other positive additions.

Excited, I tasted the wine and I was positively surprised. It was different and much more elegant. In a few years I have seen many cement eggs in many different cellars. In every one it is the main attraction. The small elaborations made in them are usually the most exclusive of each winery and consequently the most expensive. In all my visits I asked what were the special characteristics, the advantages and the peculiarities brought to the wines made in such a unique tank.

The answers have been more or less the same as the first one I received when I first asked, which left me without a sure conclusion, without certainty.

If we think for a while we will realize that the use of the cement egg has so little in the world of processing that there are very few reliable conclusions. The small size of the egg does not allow large quantities in it, which makes it difficult to follow the evolution of the wine. Nor has the time been long enough to know if wines made with an ovoid container become more capable of aging. It will be necessary to wait and ask in a few years, when the opinions of the processors are based on reliable data.

Here are a series of specific characteristics that apply to these ovoid containers of cement. 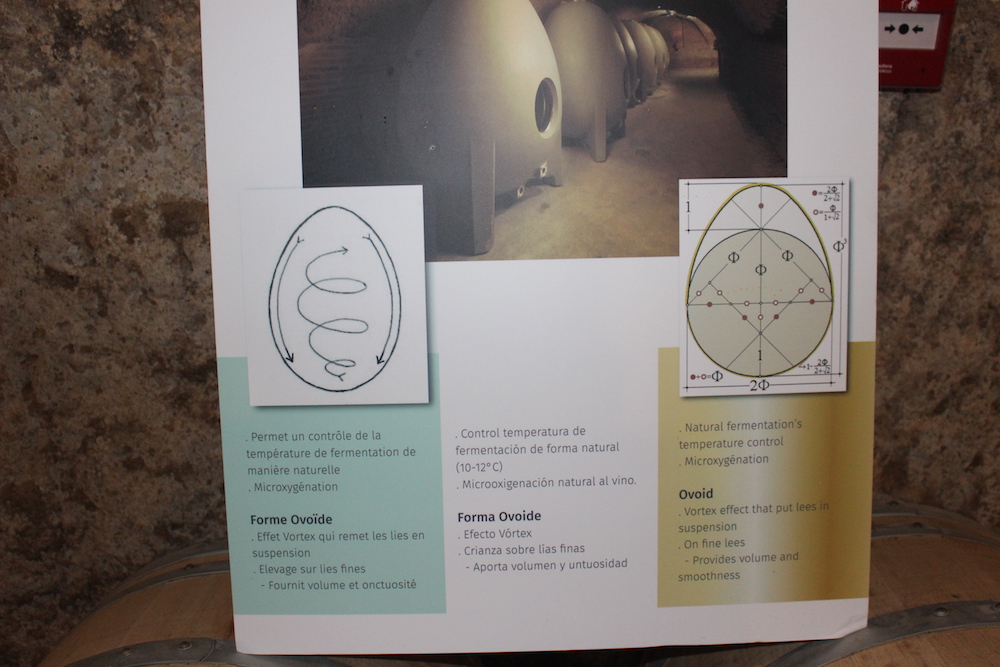 I have found an interesting end-of-grade work by Miguel Delso Martínez through research on the Internet, called «Study of the influence of ovoid concrete container in the development and evolution of white wines». It vinifies two white wines, one in a stainless steel tank and the other in a cement egg. The study is long but available on the Internet, so I will only highlight two of the conclusions.

When they measured the turbidity, the number of the particles in suspension, they were surprised that in all measurements there were more particles in suspension in the steel tank than in the egg. The turbidity was caused particularly by the bodies of yeasts (white wines are previously pressed and have skins and nuggets separated from the must), despite the movement of the wine inside the tank.

The study claims two possible reasons: First, that the material is more important than the form. Second, that stainless steel generates electric charges that slow down the clarification process. It could also be that the micro-oxygenation of the cement accelerates the decantation, yet this claim is not proven.

According to the study, in blind tastings made by experts, there is a 95% probability of the wine made in a cement egg being identified as being different. It seems proven that the characteristics provided by the cement egg are different from those of other containers. It is amusing that in the qualification of which they had liked more, the wines vinified in the cement eggs received, with a clear trend, the worse results. The study itself recognizes that it is necessary to do more studies to arrive at reliable conclusions, although at this particular stage I have taken any conclusion available, or at least I have confirmed part of what I suspected.

There is no reliable evidence of the virtues of the cement egg. The reason being that beyond the want of controlled experiments, are the few vinifications realized in them. There is insufficient data to draw credible conclusions to define what are the possible virtues acquired by wines. They have evident advantages and few defects, which make them a container suitable for vinification. Cement and concrete have always been good materials for making wine. The ovoid allows longer fermentations to better dissipate the temperature. The micro-oxygenation through the walls, similar to the barrels, occurs with a material with lesser aromatic signature and therefore has a smaller impact on the wine. All these characteristics give the producer a good tool to make different types of wine and create their own style.

Another thing is that the producers themselves have some idea of what will be the final result and what has been the real reason to buy a widget so rare (and expensive). From my point of view the real reason is that it looks nice anywhere in the hold. The explanation that the wine moves is very visual and draws much attention. And brings to the winery the prestige of being «up to date» in the new methods of vinification.

Marc Nomblot left the family company in 2010, selling it to a much bigger company. Michel Chapoutier defined him as «loyal and dreamy» and worked very comfortably at his side. When Nomblot left the company, the problems began. The new company does not recognize any design right to Chapoutier. Obviously, they claim, the egg shape is in nature, so does not belong to anyone. Chapoutier has not received a single penny for his idea and he is thinking very seriously of suing the group Bonna Sabla, the current owner of Nomblot, although this is unfair, do not feel sorry for Chapoutier, seeing as he has the most wines with 100 Parker Points. 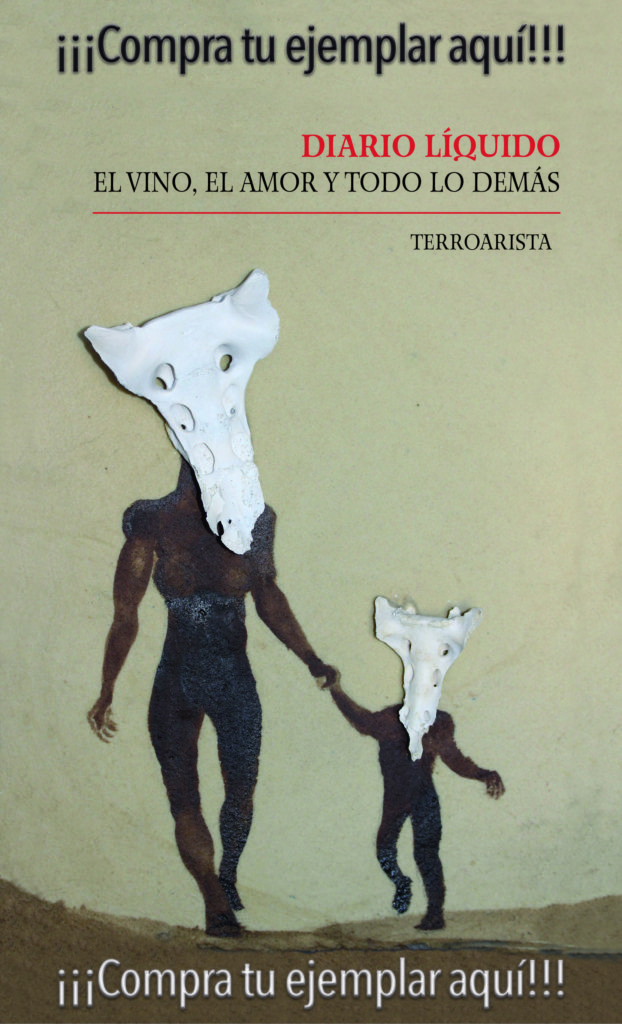